There is a very real stigma attached to the concept of self-publishing, and many people will denigrate a self-published book due to the perceived amateur nature of its production. Complaints are typically aimed at failures in proper editing and proofing, while another major bugbear is that of the design of the books interior, with excessively wide indents, poor font choice and other typographical issues. And don’t get me started on covers! 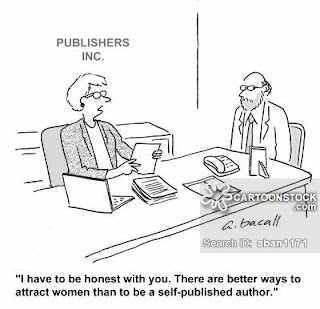 I will be honest and say that there is a very good reason for this unfortunate stigma, however, in the early days of any new industry, and that is exactly what this is, there is likely to be a good deal of rushed, not quite ready for market products. I believe that as the industry matures, this will sort itself out and quality levels will rise. This has happened with many new industries in the past, and I believe that the self-publishing market will follow that trend, as more and more self-publishing writers develop professional standards.

Well, they say that if you do not know your history, you are doomed to repeat it. So let's take a little walk back in time and examine the truth of that assumption.

Traditionally, publishing was a free for all that allowed anyone with a few shillings to have a print run of their play or poem, or, as often as not, someone else's play or poem, to be printed, in limited numbers. These would then be sold on the street or through any number of businesses. In her paper, 'Print Peddling and Urban Culture in Renaissance Italy,' Rosa Salzburg remarks on how printed wares were available not only from members of the printing guilds, but also from merchants of many other types, including, in at least one case, a butcher. Now, this was in the 16th century, so evidently, self-publishing has a long history.

It would seem that regulating the production and sale of printed material in the early days was difficult, and amateurs competed directly with the guilds. Of course, over time, the printing guilds exercised more and more power, forcing writers to produce their work only through guild members and eliminating any non-accredited competition.

In Shakespeare's time, publishing houses as we know them did not yet exist. In London, the yard of St. Paul's church was the center of printed wares, and many vendors set up shop to meet the growing demand that the public had for plays, homilies, poems, and all manner of texts. In 1593, finding himself a bit short of cash, Shakespeare self-published a long poem, Venus and Adonis. He then sold this in the yard at St. Pauls, alongside many another self-published writer, and pocketed the profit. Evidently, this worked out quite well for him, as he repeated the experiment in 1594 with another poem, the Rape of Lucrece. These were the only printed materials we know of that that Shakespeare personally oversaw. Few would condemn this early self-publishing effort from the world's greatest writer, yet that was exactly what it was. 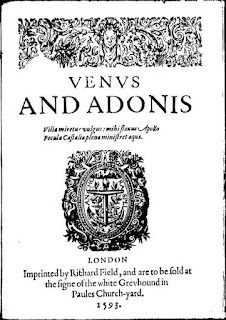 Before his death, 19 of Shakespeare's plays had appeared in folio. These were all branded as fraudulent by the editors of the first official collection of Shakespeare's works, Heminge and Condell. In the preface, they wrote of "diverse stolen and surreptitious copies, maimed and deformed by the frauds of injurious imposters that expos'd them." These early quartos are indeed seriously flawed, and clearly do not demonstrate the hand of the Bard himself. Pirated books are, of course, still an issue, more so than ever in fact, but that is the topic of another discussion.

While Shakespeare holds a preeminent place in the canon of western literature, and rightly so, the fact that he self-published his own work, rather than trust it to any member of the printers’ guild to handle for him, leads me to some interesting questions.

Did he want to ensure the quality level met his standards? Was he concerned that his work would be treated as just another 'job' and not given the proper attention it deserved? Did he resent paying more for a service that he could do as well, or better? And did he resent losing money to a guild that did very little, other than subject entrepreneurs to their control?

My feeling is a resounding yes to all the above.

Are these questions relevant for authors today? I believe they are. Far from being the last bastion of good taste and surety of quality, traditional publishing is excessively slow, highly conservative, and extraordinarily costly for the author. There is, no question, a degree of satisfaction to be derived from being signed to a traditional publishing house, but once your ego has been sufficiently stroked, surely it will matter to you how your book is treated. The editing, the marketing the cover design should all fit with your vision of your work. Yet, the writer has little or no influence over these decisions.

Naturally, a compromise is likely. I think that this is already occurring as independent publishers are on the rise. These are small publishing houses with a personal interest in your work, who see the value in your vision, and who will go to great lengths to realise it. Sure, there is always a bottom line, but they can get you to market faster, will collaborate rather than dictate, and they provide much higher percentages in terms of royalties. It is certainly the case they their reach may not be as far as their gaze, but what they lack in market share is more than made up for by enthusiasm and the care in which they treat your work. If that is not the case, then another publisher might be the way to go. Or none at all.

Self-publishing does not have to be a one person act. They say it takes a village, and writing a book is no different. You can find help in many places, but some things need to be professionally handled. Editing and cover design are two areas where one should not try to take short cuts. Finding the right people to work with is vital, but if you line up the right team behind you, your work need not be tarnished by any stigma.

For my own books, I hire a freelance editor. I hire a freelance cover designer. I do all the interior design work myself. I am proud to self-publish. Better to be your own boss than merely a small cog in someone else's wheel. Or, as Khan himself said, "Better to rule in Hell, than to serve in Heaven."

Now, pass me my pitchfork.