Are all editors the same?

When it comes to finding an editor, there are a good many things to consider.

Obviously, talent, cost, availability and how they communicate are important. But so are their knowledge of your genre, their personal experiences and passion about your work.

It is not just the grammar, readability and flow of the writing, but also the little things that make a story more interesting, giving it credibility. God is in the details, they say, and so is good writing.

A fantasy novel, set in an alternate world.

I had a book where, due to the genre as much as anything, I assessed the technology level to be equivalent with our own medieval history. This is a pretty common starting place for fantasy books. You can have a trebuchet, for example, but not a rocket launcher. Some technology is anachronistic and has no place.

So, when I read that a character 'pulled down on a door handle,' I had stop and ask myself, does that sound medieval? After all, the door handle, as we know it today, was not invented until the nineteenth century, in 1878 to be specific, by a man named Osbourn Dorsey. I did not know that as I was editing the book, but I knew that the door handle was not consistent with the genre. So, as editor, I suggested door latch, which is consistent with the technology, genre, etc.

Not exactly earth shattering, I hear you say, and you are right. But I believe that an editor has a duty to catch little things like that. 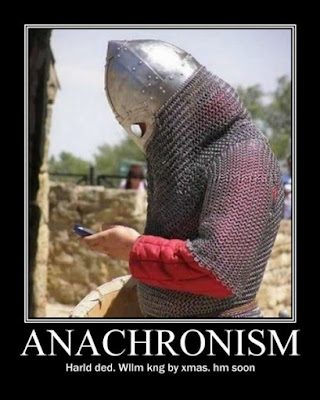 Other examples of anachronistic technology would be the use of glass. So often historical writers will have their characters open windows, stare in mirrors, or generally quaff from their glasses. While glass itself was discovered a very long time ago, its use was generally quite limited. Certainly it would be only available to nobility, or ecclesiastics in 'ye olden dayes,' and not something taverns would provide for patrons. For the lower classes, perhaps a glass bead would be a prized possession.

Glass was used in windows, for example during the pre-Norman Anglo-Saxon period in England, but these would be quite small and certainly would not open. The technology simply did not support large, planed glass panels.

Which leads me to mirrors.

A historic novel mentioned a full length glass mirror. Not gonna happen. A small, handheld mirror 'might' be okay.

Another area where expert knowledge is useful, is historic weapons. Now, it might be a bit much to expect your editor to know everything about everything. However, he or she should at least know someone who is an expert in a given field, and can provide advice.

I recently needed to verify the grammar of some Viking age Norse language, so I turned to some online forums and found people who were expert in that field, and I reviewed the text with them.

In another example, the author had written that a sailboat had a ramp in the middle that led down to the lower decks. One of the characters was in a wheelchair, and used the ramp to get up and down, without assistance. This was a key part of the story.

According to the principle that 12 inches, requires 12 feet, then the ramp would need to be 72 feet in length. Clearly not something you can have in a small sailboat.

Editing a book is more than grammar checking or even commenting on structure, character and story arc. It is about ensuring that everything is correct. And that means research.

If your editor is not willing to go to those lengths, then I think you need to find one who will.
Posted by Unknown at 04:00