Hi, I’m, author MJ Kobernus of the Guardian series, and I’m your host for this stop in the Hunt.

If you would like to find out more about the Hunt, please click here - http://vfcscavengerhunt.weebly.com/
Somewhere on this page is a hidden number. Collect all the numbers from all the authors’ posts, and then add them up. Once you’ve added all the numbers, and if I am your last author, please head to the official website and click on the ENTER HERE page to find the entry form. Only entries with the correct number will qualify to win. 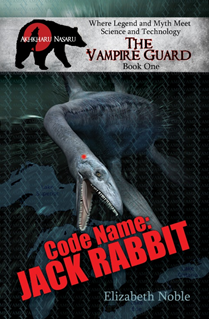 Meet the newest members of the Vampire Guard, where legend and myth meet science and technology. Jonas Forge, vampire. Once a spy and soldier, now a cop, Forge enjoys the life he’s built with his friends in Flint, Ohio. Blair Turner, PhD. Blair, a vampire and computer hacker with exceptional skills, shares a powerful empathic bond with Forge, his soulmate. Declan, vampire, ex-pirate, ex-fur trapper, thief, and con man. Declan is Forge’s former lover and soulmate to Lucas Coate. Lucas Coate, MD, Flint’s medical examiner. A werewolf living amongst vampires, Lucas is also one of Forge’s best friends. Their lives become complicated when an impending presidential visit throws them headlong into a world of high tech vampire spies and espionage. Recruited into the Vampire Guard by the secret society of the Akhkharu Nasaru, they uncover a werewolf terrorist organization known as the Qiguan. Together they must thwart a murder attempt on the open waters of Lake Superior while tracking a previously unknown biological weapon controlled by the Qiquan—a weapon that may very well mean death for one of them.

Lucas decided it was his good luck—no, it was a real blessing—neither Declan nor Forge could read his mind. Right now he wanted to kill them both. Lucas could do it too. Ten minutes wolfed out was all he needed. Vampires might be faster, but werewolves were stronger.

Being in a surveillance van with three vampires wasn’t the fun and excitement one might expect it to be. Lucas liked Kai, but he was sure Ori would agree that in this circumstance, Kai would have to die too.

Forge was pacing, at least as well as a man could inside a van with three other decently sized men. Lucas was leaning against one side, gazing at a camera feed, and doing his best to stay out of the way and not strangle Forge.

Declan put both hands on Forge’s shoulders and said, “Jonas, he’ll be fine.”

“He’s never done anything like this.” Forge turned and stared at the monitor. “Damn, I wish I could see him and not just hear him.”

“Jonas, it’s a pizza parlor, and she’s a research scientist. What the hell can she do to him?” Declan asked. Forge and Kai both turned to look at him. Declan heaved a sigh and shoved Forge into the seat beside Kai. “Relax. You can hear every word they say and feel what Blair feels. If anything goes wrong, you’ll know it practically before he does. You and I muddled through information collection with far less support and lived.” Declan rolled his eyes and focused on Lucas.

“I should go out there and back him up. In case.” Forge started to stand, but Lucas helped Declan push him back down.

“In case of what? They run out of pepperoni?” Lucas asked.

“She might recognize you,” Kai said. “You’re the head detective of this town. There is no need to take the risk someone will recognize you and blow everything. Besides, when making contact with someone with the express purpose of entering some sort of relationship with them, having your bond mate hanging around a few feet away is a bad idea.”

“He speaks from experience,” Ori chimed in and chuckled.

“You all do realize I can hear you, right?” Blair’s voice was crisp and clear coming from the speaker.

“Heads up. There she is. She’s about to walk through the door,” Kai said. He pointed to the monitor. “Got to love predictable people.” 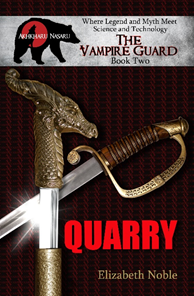 Book Two of The Vampire Guard, Quarry, will be available for pre-order from DSP Publications on October Seventeen, Two thousand and sixteen.  http://bit.ly/1UKdyvj

Elizabeth Noble lives by the adage “I can’t not write”. She can’t remember a time when she didn’t make up stories and eventually she learned how to write them down. A part of every day is spent living in worlds she created that are filled with intrigue and espionage.  Using a real love of scifi and urban fantasy highlighted by twisty plots she crafts stories taking place in a slightly altered version of our world.

When she’s not chronicling the 11 adventures of her many characters Elizabeth is a veterinary nurse living in her native Cleveland, Ohio. She shares her little brick house with an adorable canine princess and her tabby cat sidekick. Elizabeth is a fan of baseball, basketball (go Cavs and Indians!) and gardening. She can often be found working in her ‘outside office’ listening to classic rock and plotting her next novel waiting for it to be dark enough to gaze at the stars.

Elizabeth received several amateur writing awards. Since being published two of her novels have received honorable mentions in the Rainbow Awards. Her novel Jewel Cave was a runner up in the 2015 Rainbow awards in the Gay Mystery/Thriller category.

Did you find the number? If you did, then click Elizabeth Noble’s link – http://elizabeth-noble-thevampireguard.weebly.com/ to continue Virtual FantasyCon’s Blog Hop Hunt.
Posted by Unknown at 02:11