This is something of an embarrassing admission; I have gas. Well, let me clarify. What I actually have is G.A.S. or Guitar Acquisition Syndrome. It sounds like a sickness, and believe me, it can be a genuine affliction.
Those of us who suffer from GAS are clinically incapable of logic, reason, or plain common sense when it comes to the object of our desires. Now, just to be clear, it is not any old guitar that will have our hearts palpitating and saliva drooling down our chins. It has to have that certain 'je nais se quoi.' That little bit of magic that makes it impossible to put down. We want to possess their history, their beauty, their soul. To have our very own Precious. 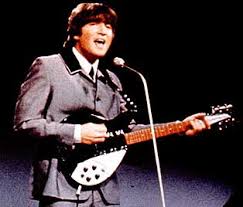 I suppose I have always known I was susceptible. When I was young, I watched everything by the Beatles. I loved Lennon's Rickenbacker and wanted a black and white guitar just like his. Later, when I started to play, I had a piss poor acoustic ordered from a catalogue. It was likely a Kay 6 steel string. All laminate and with an action so bad you could use the strings for a high wire act. I bled for that guitar. Quite literally. As Ringo once said, "I've got blisters on me fingers."
In time, you toughen up. And when that happens, maybe it's time to get something better than the cheese cutter menace you’ve been learning on. Like most kids, I wanted to upgrade. This is a pretty common attitude for any guitar student, and many will trade up as quickly as they can. Most people aspire to own a Gibson or a Fender. Those who are a bit 'fringe' might want a Mosrite or Rickenbacker. But when you are young and starting out on your musical career those are pipe dreams. What you get is an old Teisco del Ray, or perhaps a Columbus Les Paul. These look like real guitars, but they have dodgy wiring, scratchy pots and pickups that cut in and out.
As a child of the 70s, those were the axes we traded. We played Iron Man and Smoke on the Water, and thought we were cool. We weren’t. Cool was reserved for the kid who had the Fender Squier Telecaster. And while we all looked down our noses at it, because it was not a proper Fender, at least it stayed in tune and it certainly looked good. In 1982, that would have been an original JV series guitar. Worth a small fortune today if he had kept it. But of course, I can pretty much guarantee he did not. None of us kept our first guitars. We traded and sold them as fast as we could. We begged, stole and borrowed to get better instruments, always striving for the ultimate, which for me was a Gibson SG.

I had a lot of guitars in my teens. Some of them are now very collectible. I still pang for some that I have loved and lost. One notable memory is my Vox Standard 25, one of the heaviest guitars I have ever owned. It was made in Japan by the Matsumoko company, who also made guitars for Aria,
Washburn, Epiphone and many more. It had a maple body, with a black finish. Its three DiMarzio FS-1 pickups and maple neck made this guitar a Strat killer.
I was really not very good at that time. Like most seventeen year olds, I thought that if I could play Stairway to Heaven that meant I was as good as Jimmy Page. A collective delusion that a good many novice guitarists seem to suffer.

I sold the Vox, and bought a Kramer DMZ 2000. If you do not know what that is, I urge you to take a look at them. It combines an aluminum and wood neck, with a forked headstock and a heavenly body made from maple and walnut with DiMarzio pickups and a Badass bridge. Again, a very collectible guitar due to its seriously awesome nature and rarity today, and if I could afford it, I would have one.
There have been other guitars over the years. So many, it is hard to keep track. At one time, I even owned the very same model guitars that John, Paul and George had begun their careers with. To whit: A Gallotone Champion, an Egmond, and a Zenith Model 17. Most likely these guitars were not from the same year of manufacture as those owned by the Fab three, but who cared? I was almost a Beatle! I sold those guitars to a friend in the US who, like me, was a huge fan. Sadly, he died not long after getting them. I still cherish the note he sent me, thanking me for helping him achieve one of his dreams. 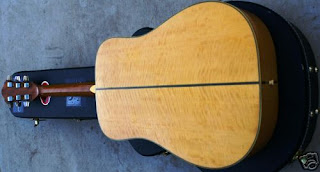 I was 17 when I got one of my all-time favorite guitars, an Ibanez M310 I called 'Blondie.' This is a lovely model, with a beautifully patterned flame maple back and sides and a solid spruce top. I carried this guitar all over the world, and have played it while sailing on the river Nile, on a rooftop in Jerusalem, in Cologne Cathedral and a boat on the Chesapeake Bay. In 2001, I sold it to a colleague in the US, before moving to Norway. It broke my heart to see it go, but we needed as much money as we could get to fund the move.
Years later, the M310 had become a hole in my heart. I tried to fill the aching void, so I bought a Gibson SG with P90s, and a Baachus Les Paul with a quilted top, and a 1973 Gibson Les Paul as well as numerous other guitars. I had finally arrived at a place where those big brand name guitars could now be mine. But somehow, they did not satisfy. I found myself frequently watching the auctions, looking for I don't know what. 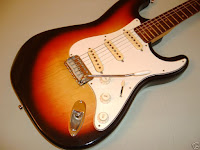 Eventually these top of the line guitars went the same way as the rest, sold and traded. In the end, I had just one guitar left. A 1973 Ibanez Strat.
For some years, that was how it was. Just one guitar. Then along came the chance to purchase an acoustic from a singer and performer in the UK that I admired, and I jumped at it. Hello Simon & Patrick Cedar 6. This became my main axe for a goodly while. Then along came a Terada Hummingbird. A lovely guitar, with great tone and great looks. Then, during a vacation to Florida, I re-acquired Blondie, the Ibanez M310 I bought in my teens. It had been over 15 years since I had last seen her, and she was, once again, mine. That makes me both her second and fourth owner! 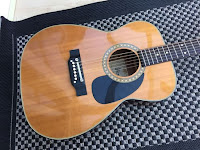 My most recent purchase is a very clean, vintage Ibanez Concord. It is a model 65. I am not sure
about the age, but it is obviously 1970s and is a fine instrument.
The GAS comes and goes. I find there are long periods, years even, when I do not browse the auction sites or search the classifieds. But when the hunger is upon me, I become a raging beast, a man, driven by urges he cannot control. It can be a hard thing to have GAS.
Still, it could be worse. I suspect that my wife may have S.A.S. Shoe Acquisition Syndrome!