I have always been fascinated with linguistic expressions.

In English there are many. Some of them have an interesting historical meaning or explanation, while others are completely baffling. The connection between the words, and what they represent is often obscured by history and common usage.

For example, take the expression "three sheets to the wind."

This is, as most English speakers will tell you, another way of saying that someone is drunk.

The meaning of this expression originates from England's heritage as a great naval power, as do many of the language's most common and colourful expressions.

The original phrase was actually "three sheets IN the wind." This might seem like a minor distinction, but when you stop to consider what the phrase is actually saying, it makes perfect sense.

The 'sheets' aren't sails, as you might expect, but lines or ropes. These are fixed to the lower corners of sails to hold them in place. If three sheets are loose and blowing about in the wind then the sails will flap about uncontrollably . . . like a drunken sailor.

Hence the metaphor "three sheets to the wind" being applied to anyone who has had one drink too many. 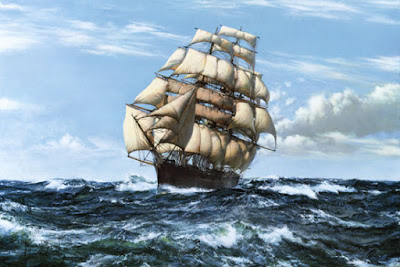 Since we are on the topic of England's sailing past, some other linguistics tidbits are:

Being 'all at sea' to mean confused or lost. This one does not need any explanation, I feel. But the next may.

Being 'taken aback' to mean being surprised, comes from when when the boat points into the wind and the sails press against the mast, and forward progress is suddenly stayed. This may also lead to being 'in irons,' which occurs when forward momentum is lost.

A very common expression is 'the cat is out of the bag.' This is usually taken to mean that some secret is now out in the open. However, the cat in question is actually the 'cat of nine tails,' or a very nasty type of whip. This was used to keep order on the navy boats, and to dish out punishment. It was greatly feared. If the cat is out of the bag, then someone is about to get a very nasty surprise indeed. 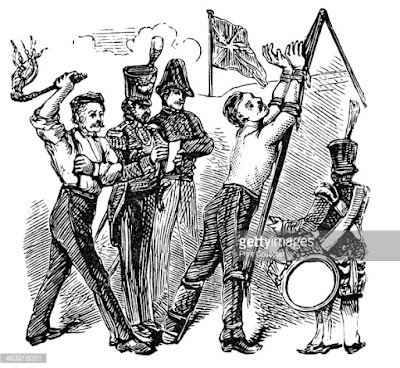 Of course, now that we know that the 'cat' in question is actually a whip and not a member of the species Felis silvestris catus, then this next expression takes on a whole new meaning;

I am sure you have heard people say of a small house, or apartment, that there is 'no room to swing a cat.' This colourful expression means pretty much the same to us, as it did to 18'th century sailors. Simply, there is not much room.

During a punishment detail, all the sailors were called on deck to bear witness. In the case of a ship with a full complement on board, this could make for a very crowded deck. In fact the deck could be so crowded that the cat o' nine tails could not be used without hitting the observers, so there was literally 'no room to swing a cat.'

Well, that was a fun walk through linguistic history. But let's have just one more.

'Swinging the lead.' This expression is taken to mean that someone who is doing this is being lazy and not working hard. 'Swinging the lead' is quite literal. Before depth sounders were invented, the only way to tell the depth of any water was to measure it. This was done with a line with a lead weight. The line would have knots on it at regular intervals, and the sailor would count the knots as the line fed through his hands.

The job was considered very easy and whoever did it was often accused of taking more time than was necessary and therefore being lazy. Therefore anyone who took longer than required to accomplish a task was 'swinging the lead.' 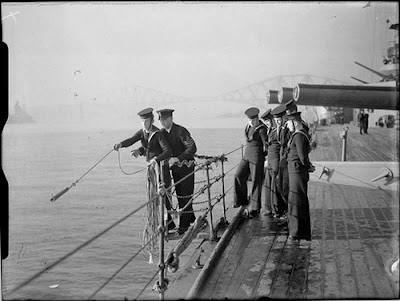 Well, this was a very limited review of nautical expressions in English. Just to give you an idea of how many more there are, take a look at this list. I am sure that you will recognise some of them. I can say that I have used probably close to 25 of these expressions, at one time or another, and I am particularly fond of several.

aloof
bail out
bear up (down, off)
catch my drift
chock-a-block (chock full)
clear the deck
close quarters
cross the line
cruiser
deadwood
dog's body
down the hatch
fend off
first rate
from stem to stern
give leeway
go overboard
great guns
groggy
halcyon days
haul up short
hit the deck
hulk
in the doldrums
junk (chunk)
learn the ropes
logging on (disputed nautical origin)
loose cannon
lower the boom
main stay (as in "he was the mainstay of our team")
make a clean sweep
on an even keel
on another tack
plain sailing
run afoul of
shake a leg (or) show a leg
show your true colors
snub
sound out
standoff
stranded
take someone down a peg
take the wind out of his sails
weather a storm

The River Rolls On

Many people have a fear of death. It is called necrophobia. For some, it plagues their lives and is a constant source of dread and unease. Why is this? Is death something that we should fear? Does angst help us to avoid it? Can we eek out our existence one second longer for all the hair pulling, bead counting and hand wringing worry? Of course not.

Perhaps then wasting time on something that we cannot avoid is pointless, and serves no purpose? Perhaps. But perhaps there is value in contemplating death? After all, it is a major event in all our lives. But while it may come to us all, what does it really mean to us?

In some cultures, death is not seen as a permanent fixture. It is not the silent night, the abyss of nothingness, but a transitory state through which we pass on the way to, hopefully, more elevated levels of being.This sounds attractive, and it makes me wonder why we put so much credence into religions that teach permanent salvation or damnation. The very idea of a heaven or hell is quite contrary to all that we know about the universe, which arguably may not be all that much.

But let’s just think about this for a second. Let’s take a step back and consider what is life, before we consider what is death.Every new life that is born is the result of millions of years of care and struggle and love. We are the endpoint for the hopes and dreams of a multitude. We are, each of us, Legion. This is a form of immortality. Whatever else happens, we are a part of the great river of humanity. One drop more or less, what matters it? The river will keep rolling.

I do not fear death. All life is but a complex dance of energy and matter. When the substance of the matter changes, it is not lessened, it is not gone. Burn a log of wood and you get ashes. But you also get heat, and flames and smoke. Energy is released into the universe, to mingle and combine and be made anew.

Death is not terrifying. It is not the end of life but its transformation. Dying releases the energy of our beings and lets us recombine in new ways, creating new life. We are still a part of the universe; we never leave. The river rolls on.

But if this still terrifies you, then calm yourself. Look to your child. Kiss and hold your baby and remember that you are blessed with two lives. The one that will recombine in endless ways in the universe, a pure energy that can become anything and everything, and in the other, you live on in your child. You hold the end point of billions of men and women in your arms.

Now look around you. Do you see other men and women? Other children? They are a part of you too. They are your sisters and brothers. They carry the same thoughts and dreams as you. They live, they die and they transform just as you do. And yet, they carry on too. A part of them exists, and will always exist in the billions of lives that exist in the world. You are part of that great chain of life. And when you die, that chain is not broken. It connects with every other chain, every other life that ever was and ever will be.

The river rolls on. 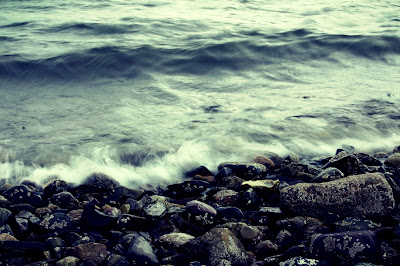 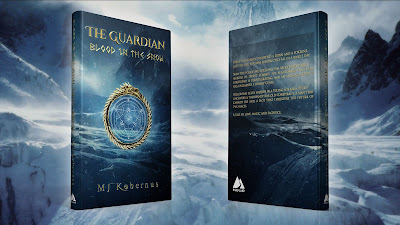 The second installment in the Northlore Series is out now. 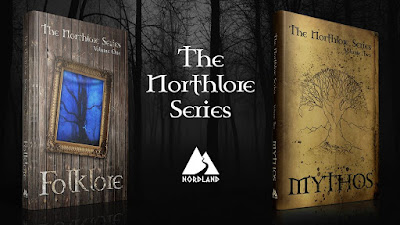 Over a period of 400 years, Christianity came to the Scandinavians, sometimes at the point of a sword. Slowly it spread, until only small pockets of the old religion persisted. The gods of the North understood their time had come. They withdrew from the world, disappearing into the realm of myth. But they did not die. This is their story: Mythos